Not so long ago I was contacted and asked if I wanted to try out a Purrfectbox for my cat, I didn't have to ask him twice, I'm a mad cat person and I love my Samhain to bits, I spoil him rotten and if I could he would have all the cat subscription boxes going. I also like discovering new things for him to try, so it was a big fat yes.

I'd forgotten all about it until today when it arrived, it's a super sized box. Samhain was so excited he decided it would be best to sit on it for a while, which he did. When we did open it he got super excited again, in usual Samhain fashion he got in and, well, we had to remove him before he marked his property. Him marking it (he's had the snip so marks with urine) is the highest compliment a product can get!


Firstly I was impressed with the range of products included, as we already receive a cat subscription box I was worried there would be an overlap but there wasn't with a single item. There are products that should satisfy him, the food, the toys but there are also a couple of items that will give me peace of mind. 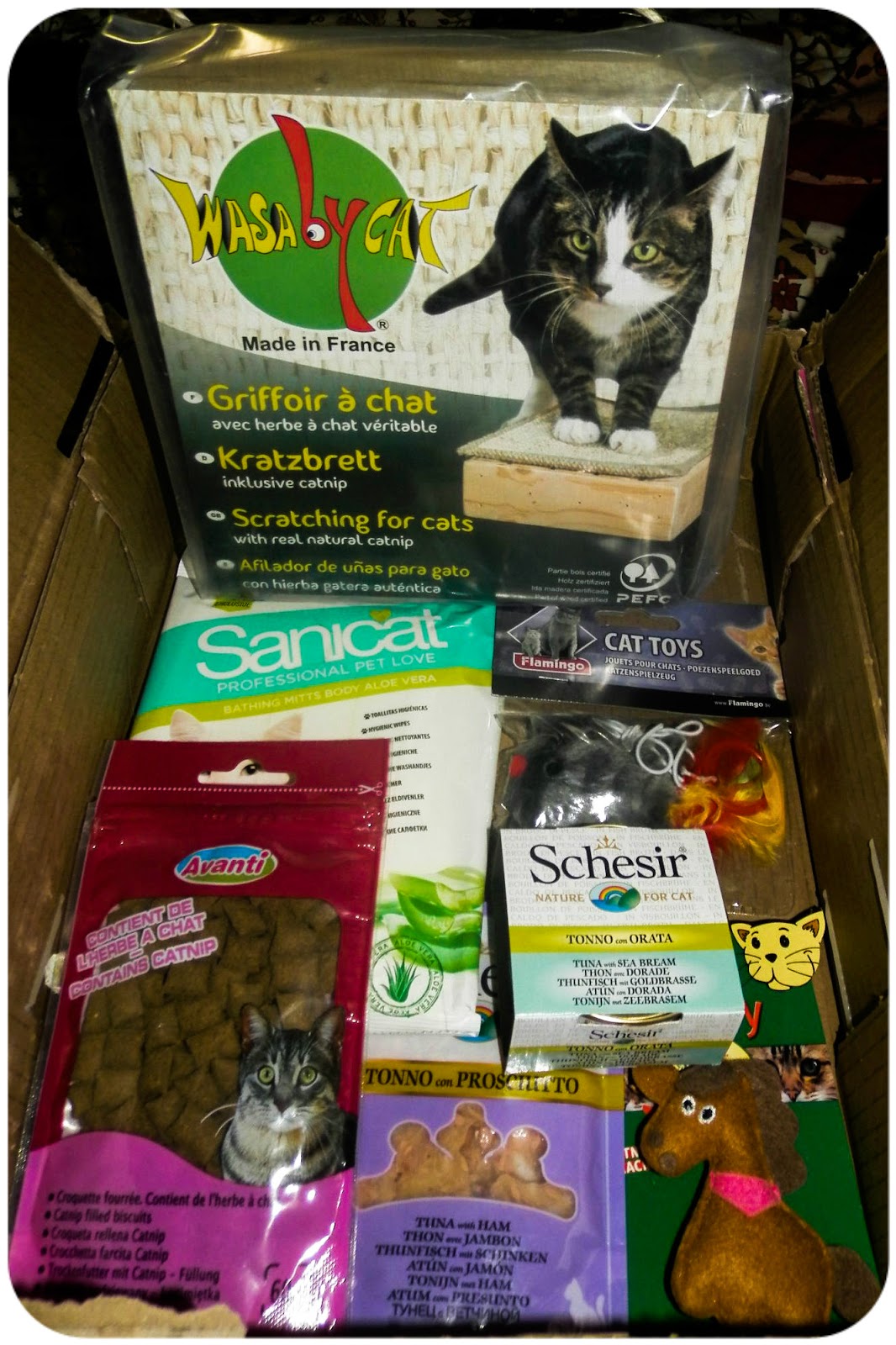 Sanicat Bathing Mitts with Aloe Vera (4 units) Around £5.00 a pack of 4
This product is certainly for me and not Samhain, although he does love to be towel dried after an adventure in the rain (which for some reason he loves). In general Samhain is clean but sadly he gets into fights. Samhain is a rescue cat and is generally settled with us but hasn't sorted out his territory outside. Worryingly he has had a few bad fights and is currently under house arrest (which is torture for him). Now this isn't suitable for open wounds but as everything is scabbed over on Samhain, half of the scabs have come off, I'm going to use this mitt to give him a good clean, but will he like it? actually, he didn't mind it at all. The mitt isn't too wet so this didn't alarm him, he just enjoyed it as an extra little rub down.


Flamingo fish toy & Karlie horse toy
Two new toys for Samhain, we will never know Samhain's real age but he is estimated to be around 10, he plays like a kitten though. We can never get enough toys as he always wants new entertainment. We bought him an activity tunnel for Christmas and one thing he likes us to do is hide little toys in it, balls, catnip toys - or straight up catnip! Six months into his adoption we are getting to the point where we need to retire some of his toys so these are a welcome addition. The fish toy is from a brand called Flamingo, Both the horse and the fish toy are well made even for Samhain's frantic playtimes. I hadn't heard of them before but they're a Belgian company, I've just looked them up and they have some other amazing products. The horse toy is a German company called Karlie however Karlie and Flamingo merged a few years ago, not that it matters just and interesting fact.


Schesir 100% Natural Foods
We received two different flavours from the same brand to try, both are fish based, I try and feed Samhain a fish dish each day. More importantly I try to feed him as much natural food as possible  I'm a vegetarian so he doesn't get anything from myself. The two flavours we received are Tuna and Chicken with Ham and Tuna and Sea Bream - I was only just thinking the other day whether Samhain would go for sea bream so this will be interesting to try out. I hadn't heard of this company before so I made sure to check out who they are and was please to see they are both ethical and eco friendly, in a way they remind me of Applaws b(which Samhain loves) - the food itself appears to be very similar which is great as I'm not always convinced when a cat food brand claims to be natural. I'm hoping that I'll get to see their products readily available in the UK sometime soon.

Wasabycat Scratching Post
Another one for me more than him, Samhain doesn't use scratching posts, he scratches everything else though, that doesn't stop me trying so for me this is a welcome addition and it might just be clever enough to make him use it. Samhain is a catnip fiend, he just loves anything catnip and the fact that the catnip sits just underneath the scratching pad might mean that he actually does the right thing and uses it as a scratching post. So far he has had a bit of a nosy at it today, not quite got the hang of it but was very interested in the cord that can be used to hang it up. He has since progressed to patting it a bit, sniffing and licking it, you never know, a proper scratch might be around the corner!


Zolux Catnip Treats
As mentioned above Samhain loves his catnip so these catnip filled biscuits are a welcome treat, I've given them an outing and he loved them so more treats to keep my little boy happy.


I'm super impressed with this box, such a wide range of products to treat my little boy with. It's nice to have a mix of treats and useful products. Also included in the box is a little magazine full of interesting cat titbits, which is a very well put together little booklet. 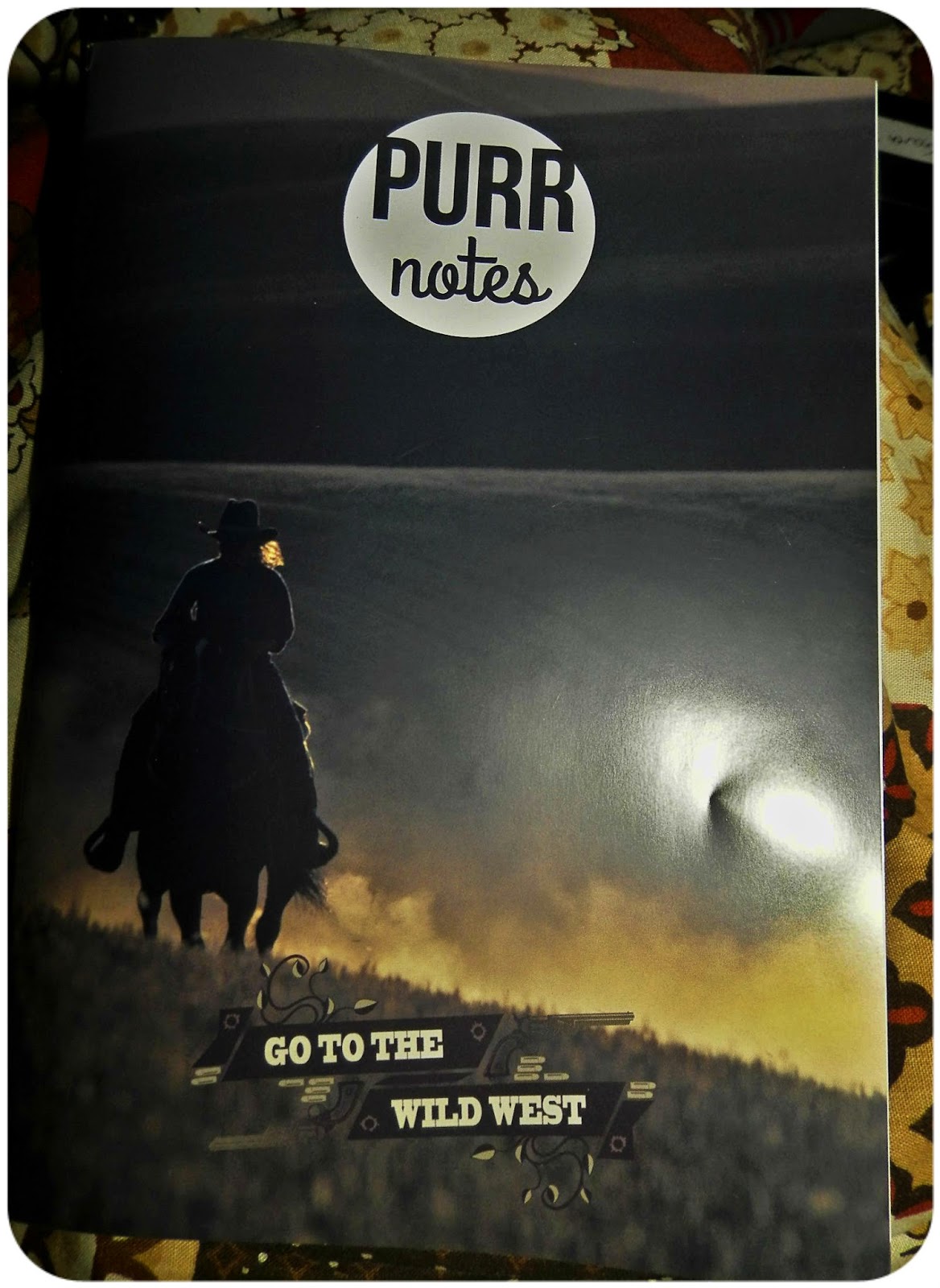 Purrfectbox costs £19.90 a month or sign up for half a year and pay the equivalent of £17.90 and an even better deal if you sign up for a year, just £15.90 a month. Not only that but you'll also be helping out a great cause. For each box Purrfectbox that is sent out the company donate part of the proceeds to help pet charities, so even better, you aren't just treating your own puss but also those less fortunate moggies. More information on this can be found on their website.